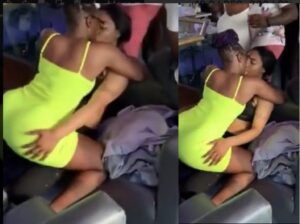 In a viral video that has caused a massive stir and got people talking, two Lesbians caught were sighted while making out in a public place.

OTHER INTERESTING POSTS ON POWEROFNAIJA   Megan Thee Stallion Airs Out Frustrations: "My Label Hate Me & My Sh*t Always Leak"

These two were busily kissing and smooching each other on a couch while others present at the Party were heavily jamming and dancing at Party.

They were unperturbed and less shameful about the atmosphere as they were focused on what they were doing at that moment.

It hasn’t been disclosed the place they were filmed but is believed to be Nigeria.