Few weeks back on december 23rd, we posted the below Video here where we announced about a Nigerian Big Boy Named Dollar Face Peters who spent N1Million on drinks on his Girlfriend’s Birthday then he proposed to her, well he just took to his instagram account to announce that the relationship is over, he posted the below photo with the caption;

@legitdollarface: My relationship with The so called girl I engaged 15th of last month is over.

see some reactions below;

Ogechi Nwani Shebi he swore it’s Tonto he’ll marry, Maybe he has finally seen Tonto unveil herself after the plastic surgery and he left the poor girl Or maybe he was the Guy that he’s passport was inside A Bottle that has been loosed. 😂😂😂😂😂 🏃

Gbenga Adedeji Marriage of now adays be like cartoon…kodus to our old mama and papa for staying together for so long….social media is crashing our marriages iluminatic…well my own marriage will be silent …

Cynthia Josiah Gossipmill is always there from beginning to end of ur life. Once u don show urself finish for social media Gossipmill will be waiting to see the end so they will tell people. Abeg Gossipmill those couple wey use tipper do wedding I’m waiting for the remix of their life, don’t forget to update us how they take buy multi million naira house and car in few months to come.😂😂😂😂

(So Touching): What a Father Told His Daughter A-Day Before Her Wedding – Read

The European clothing line sparked a major controversy over the weekend when it ran an advertisement on its website featuring a black boy wearing a hoodie with the slogan ‘Coolest monkey in the jungle’.

They were later forced to apologise, including removing the controversial garment from their collection.

Singer, The Weeknd also announced his disassociation with H&M after the clothing brand was forced to apologise for a racist advert. ‘Woke up this morning shocked and embarrassed by this photo,’ the singer wrote on Twitter. ‘I’m deeply offended and will not be working with @hm anymore.’

According to the British newspaper Metro, Diddy will be offering the little boy in the picture a one-million dollar modeling contract to join him at his own clothing company, Sean John.

(So Touching): What a Father Told His Daughter A-Day Before Her Wedding – Read

A viral video shows the moment some Nigerian youths were flaunting their brand new iPhone 13 pro max, which was released barely a month ago. 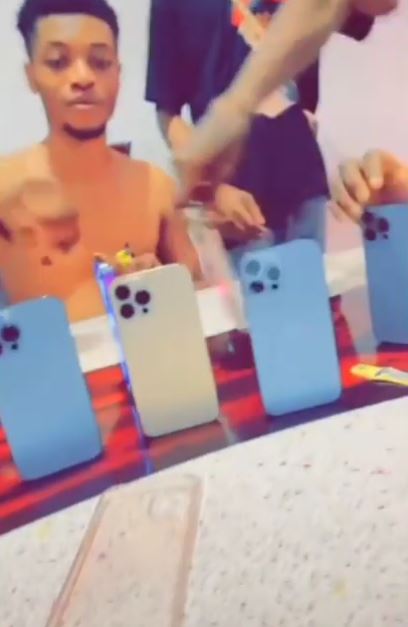 Six iPhones were placed on a dining table as the boys bragged about the price and stated that it is worth more than some people’s father’s car and house.

While they were bragging, another dude placed his iPhone 12 on the table alongside the iPhone 13s, but he was shunned and asked to remove it with immediate effect.

How much altogether… Na 6 million

Your papa GLK
Your papa land
Your papa private jet
Let the oppression begin”, they could be heard saying.

Watch the video below,

The video has generated mixed reactions on social media as some netizens opine that they’ve made themselves easy prey for officials of the Economic Financial Crimes Commission.

biancahorchids1 wrote, “Efcc save this video tracking them now

romeofb wrote, “When they parade them in public after arrest, they start blaming people from their villages. It’s like a curse money made fraudulently must be loud ; it can’t be silent”