Liverpool kicked off the new Premier League season with a convincing 4-1 victory over Norwich City at Anfield on Friday.

Last season’s record-breaking runners-up Liverpool wasted no time in setting about getting maximum points, with Mohamed Salah and Virgil van Dijk adding to Grant Hanley’s comical own goal within the opening 30 minutes.

Divock Origi made it four in the 42nd minute on his 100th Reds appearance but Jurgen Klopp’s side were unable to add to their tally and Teemu Pukki netted a consolation strike for the newly promoted side.

However, the real sour note for Liverpool was the loss of goalkeeper Alisson, who had to be replaced by debutant Adrian in the first half after appearing to sustain a hamstring injury taking a goal-kick.

An emphatic start to the 2019/20 #PL season for the Reds, after they overpower Norwich in the first half#LIVNOR 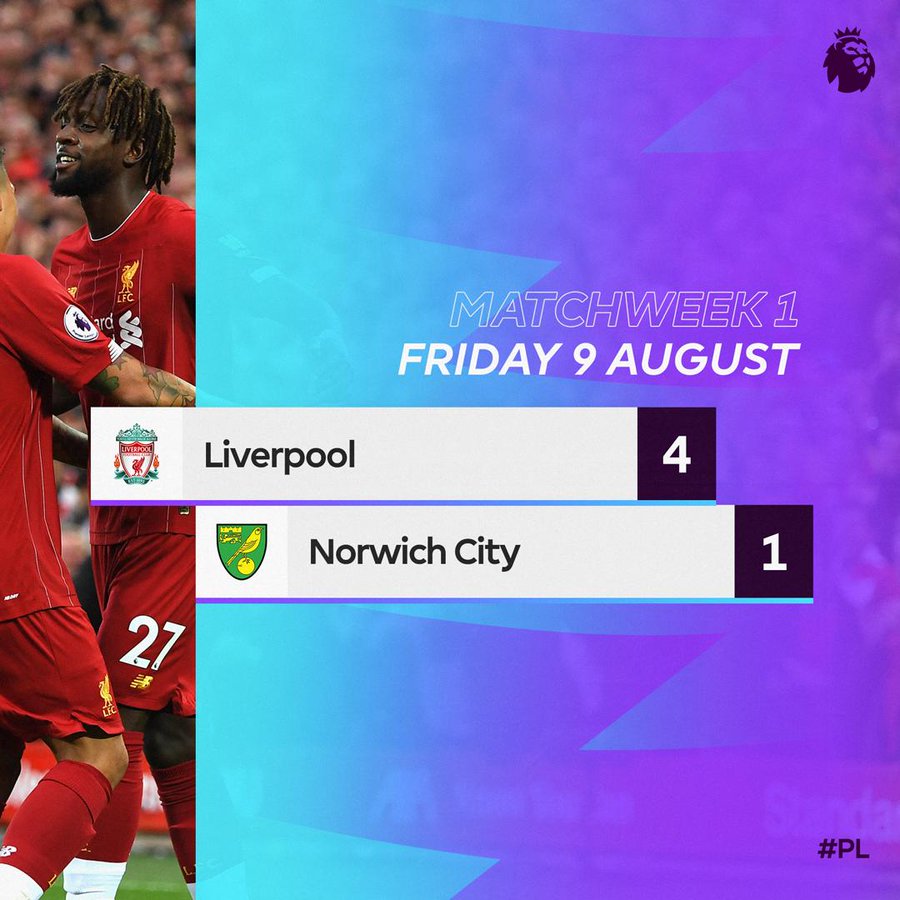 805 people are talking about this

Liverpool got off to a flying start when Origi’s cross from the left wing was diverted into the back of the net by Norwich captain Hanley in the seventh minute.

Marco Stiepermann wasted a second decent chance to get the Canaries on the board and they were punished when Roberto Firmino teed up Salah to slide a cool finish past Tim Krul.

Norwich continued to threaten but Van Dijk made light work of shaking off Jamal Lewis to power in a header from Salah’s corner.

Despite losing Alisson to injury, Liverpool remained in the ascendancy and took a four-goal lead into half-time when Origi nodded Trent Alexander-Arnold’s fine delivery home.

Krul tipped a shot from Jordan Henderson onto the crossbar early in the second half and, after Salah kept the ball alive and played in Alexander-Arnold with a delightful backheel, Firmino was unable to convert from the England defender’s cutback.

Moritz Leitner rattled the upright with a swerving effort as the Canaries regained some courage and they were rewarded when Pukki found the bottom-left corner from Emiliano Buendia’s incisive throughball.

Alexander-Arnold’s powerful free-kick was saved well by Krul in the 85th minute and Adrian kept out Onel Hernandez in stoppage time as Liverpool comfortably saw out a routine victory.

SEARCH ANYTHING YOU WANT ON POWEROFNAIJA

How Mobile Sports Betting Has Transformed How We Bet Online

COMEDY VIDEO: Mark Angel Comedy – Who is Your Pastor Part...

ABOUT US
Powerofnaija is a legally recognized registered digital media company with Nigeria’s Corporate Affairs Commission whose mission is to ‘Tell vital, interesting, entertaining and useful information first’, accurately and reliably, and our vision is to ‘Change the world for better through relaying genuine news in time’, hence we share our content through all possible platforms for the user’s convenience. AND Powerofnaija also Gives You all the latest Music And Movies Both Local And Foreign Contact Us: Talktoafricans@gmail.com
FOLLOW US
© Newspaper By Blaqkach